The Noonday Concert Series provides free access to live performances by Maine’s most talented musicians throughout the academic year. The series has always been an integral part of the Conservatory’s mission to provide equal access to high quality music and highlight its talented faculty and students. 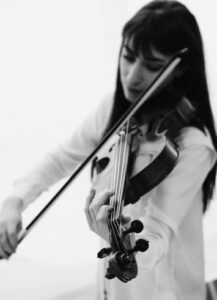 Violist Elizabeth Moore shares how her background in both the classical and folk traditions has shaped her as a musician. She talks briefly about some overlaps and differences in bowing and ornamentation between styles, playing an original waltz, and one by fiddler Winefred Horen, whose playing and tune writing has influenced her.

Growing up in Midcoast Maine, violist Elizabeth Moore was surrounded by music at an early age. She began studying violin at six, but has earlier memories of hanging out in guitar cases along the back of the stage as her father played and called for contra dances.

Whether playing folk music, participating in ensembles through Bay Chamber Concerts, or singing every chance there was, she developed her musical interests in a small yet supportive community. After discovering the beautiful resonance of the viola, Elizabeth went on to study at the University of North Carolina School of the Arts with Sheila Browne, and at Boston University College of Fine Arts with Karen Ritscher.

A violist and Co-Artistic Director in Palaver Strings, Elizabeth is also the ensemble’s Programming Director, and teaches at the Portland Conservatory of Music, Bay Chamber Music School, and the Palaver Music Center.

The performances are free but do require registration. Please visit this link to reserve your viewing space!

To keep us all safe, this year’s concert series will be presented online. Starting in November, new concerts will be posted on the first and third Thursdays of each month through May 20. Each concert will be featured on our homepage until superseded by the next concert.

We have changed the online format this season. Each video will be short in duration, 3-5 minutes, and our faculty will talk about and demonstrate their instruments. They will also share interesting aspects about the piece/s they will perform. We hope you enjoy them!

For more information on the Series or the Portland Conservatory of Music, please click here.