The Conservatory is proud to present the 2019-20 Noonday Concert Series. Join us for free quality music presented by our talented faculty and students. These concerts have been an integral part of our mission to provide equal access to quality music since 1996. 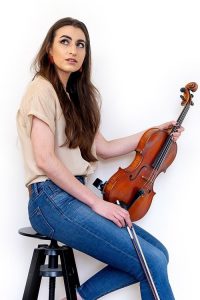 Elizabeth Moore earned a Bachelor’s of Music in viola performance from the University of North Carolina School of the Arts and a Master’s of Music from the Boston University College of Fine Arts.

She performs regularly as a violist and singer, primarily with Palaver Strings, a musician-led string ensemble formed in Boston, who now calls Portland, ME home.

A Suzuki-certified violin and viola teacher, Elizabeth combines the Suzuki method with traditional methods to set every student up with solid technique from the very beginning and to help them develop a strong and clear tone. 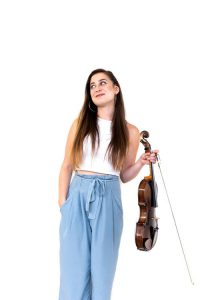 Brianna Fischler is a violist/violinist and teacher based in Portland, Maine.

She holds a B.M. in violin performance from Boston University’s College of Fine Arts, where she studied with Bayla Keyes. She also studied with Krzysztof Kuznik at Manhattan School of Music Pre-College.

She has performed in venues such as The John F. Kennedy Center for the Performing Arts, Zankel Hall at Carnegie Hall, Avery Fisher Hall, and Woolsey Hall.

Brianna has also participated in master classes with Ani Kavafian and Pinchas Zukerman, and placed first in the University of Connecticut Chamber Music Competition with the Annellie String Trio.

She is a founding member, as well as the Education Coordinator of Palaver Strings, a non-profit musician-led chamber ensemble based in Portland, ME. Brianna is also certified in Early Childhood Music Learning Theory and the Suzuki Method.