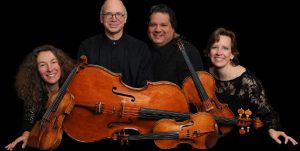 Now in its 28th year, the DaPonte String Quartet relocated early on from its birthplace in Philadelphia to rural Maine, originally on a three-year grant from the National Endowment for the Arts.  Individuals from the community, seeing great value in the DSQ’s work, coalesced around them to ensure the group remained here, where they routinely create experiences that a New York Times feature article likened to “watching the Celtics play in the local gym.”  They perform a repertoire spanning over five hundred years, from Renaissance music on early instruments to cutting-edge works on electric ones, in places ranging from France, Switzerland, Scotland and Canada to more than twenty American states.  Their recordings are distributed worldwide on the Centaur label.  The Quartet comprises violinists Lydia Forbes and Ferdinand Liva, who alternate first and second violin parts, violist Kirsten Monke and cellist Myles Jordan.