Join us for an exhibit by MAPS – Maine-Aomori Printmaking Society in the Lewis Gallery September 3-25, 2021.  The exhibit will also be accessible virtually in our online gallery with select pieces enlarged and to be viewed from Congress Street during the library’s closed times. MAPS is a project born out of tragedy. On a stormy night in October of 1889 the ship Cheseborough from Bath, Maine was caught in a fierce storm and ran aground off the coast of Shariki, Japan, now a part of Aomori Prefecture. The ship was destroyed, but some of the crew were rescued and cared for by Japanese villagers. The memory of this event launched a unique and long-standing relationship between Maine and Aomori that has lasted for more than 130 years. 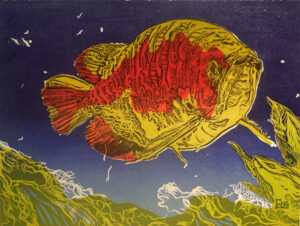 The relationship was formalized in 1989 in an official sister state agreement, and the people of Maine and Aomori have continued to develop and enrich their communities through the power of intercultural and personal connections. The artistic medium of printmaking has deep roots in both Maine and Aomori. MAPS was launched by Friends of Aomori – the all-volunteer nonprofit organization that supports the relationship in Maine – as a vehicle to connect printmaking artists from both countries through exhibitions, workshops, and delegation visits. For the first five years of the project the enthusiasm and dedication for MAPS led to a robust schedule of exhibitions in communities throughout Maine and Aomori, delegation visits by artists to both countries, and a second printmaking exchange program for K-6 students.

Now at the end of its fifth year, MAPS has grown into a multi-tiered project, presenting printmaking, American and Japanese culture, and the fascinating history of the Maine-Aomori relationship to our communities, connecting artists, patrons, and exhibition venues across the sea. “Six years have passed between us, and the solid course of the relationship continues to find rewarding steps forward,” writes Jiro Ono, who manages the project in Japan, “who could have predicted the voluminous benefit at the beginning of the project?” At its core, MAPS is the dynamic collection of prints included in this exhibition, generously donated by participating artists. This collection serves as a snapshot of the state of contemporary printmaking in Maine and Aomori, and as a map for future cultural projects in our enduring relationship.

MAPS is supported by the Consulate-General of Japan in Boston, the Rines Thompson Fund, the Expansion Arts Fund of Maine Community Foundation, and individual donors. MAPS is made possible by the contributions of the artists, exhibition venues, and is organized and curated by Friends of Aomori, and Jiro Ono, President and Director of Munakata Shiko Memorial Museum of Art.