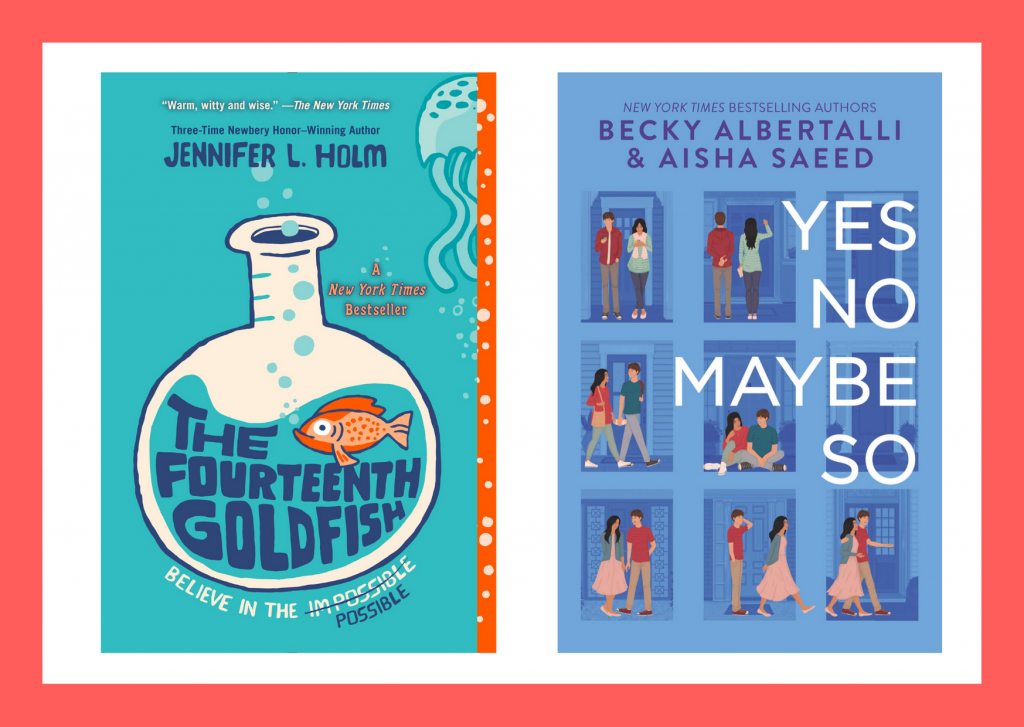 At the end of February, library workers are deep into the winter routine, hauling home the stacks of movies and books that see us through the days of sun and days of snow. We hope you are likewise finding plenty to keep you occupied! Here are our staff picks.

“I’m a jellyfish glowing in the dark sea, bright and brilliant, just waiting to be discovered.”

I’m reading The Fourteenth Goldfish, by Jennifer L. Holm, a chapter book about 11-year-old Ellie, who doesn’t like change.  When her beloved pet goldfish dies, her best friend seems to be abandoning her, and then her scientist grandfather suddenly shows up at her house, miraculously de-aged to 14 years old, she is confronted with a lot of it all at once.

The first line reads: “When I was in preschool, I had a teacher named Starlily.  She wore rainbow tye-dyed dresses and was always bringing in cookies that were made with granola and flax and had no taste.” The book is quirky and fun, but touches on a lot of hard subjects, from living with a family fractured by divorce, loss and middle-school friendship issues.  It is often very funny at the same time you really feel for Ellie and her grandfather, who are both struggling with issues of change.  I am listening to this as an audiobook and the reader is particularly good.

I also just finished listening to the inimitable voice of Jim Dale reading Around the World in Eighty Days, by Jules Verne.  Verne already has such an incredibly fresh and fun voice as an author, despite having written his books more than 100 years ago.  His sense of humor is genuinely of the laugh-out-loud variety and I was on the edge of my seat over and over, listening to this madcap voyage around the world that begins with a gentleman’s club bet on the part of the main character, Phileas Fogg.  The story is told from the perspective of his brand new French valet, Passepartout, a man who really only wants the quiet life of an English manservant, but gets much more than he bargained for.

This book even holds a mystery: Is Phileas Fogg the notorious Gentleman Bank Robber who stole 50,000 pounds at a London bank?  Is his “bet” actually a ploy for escaping capture by the Police?  Join Police Inspector Fix as he follows Fogg around the world, trying to arrest him for the crime time and again and discover the truth!

If you have put off reading Jules Verne, thinking it may be dry and boring, rush to the library today and disabuse yourself of that notion immediately, and be prepared for a laugh fest that is both touching and exciting.

Becky Albertalli and Aisha Saeed have co-written a sweet teen romance and inspiring call to action all in one. Yes No Maybe So introduces readers to Jamie, an anxious but charming 17-year-old whose cousin roped him into helping out on a local election campaign, and whose mom is pushing him to give a speech at his sister’s upcoming bat mitzvah. When he goes to the local mosque for an interfaith Iftar and campaign event, he bumps into his outgoing childhood friend Maya—and also bumps into a wobbly table, knocking the whole thing over. Their parents encourage the two to start canvassing, and while both are reluctant at first, they discover a new understanding of why local politics matter, and how important even seemingly small elections can be to protect individual rights and freedoms. Albertalli and Saeed have not only written a book that will inspire readers to take action in local politics, but they’ve also written a charming friendship between Jamie and Maya, which so sweetly develops into a romance. Readers will be drawn in, rooting for both Jamie and Maya as they grow over the course of the book — and will be anxious to see how this fictional Senate race will turn out!

For readers who are following along with the library’s 2020 Reading Challenge — this one has a potential for checking off so many boxes. Written by two authors, an #OwnVoices book, a book that teaches a skill (canvassing!), or the category I’ve fit the book into — a book I wish I could have given my teenage self. Of course, you can also now use it as a book that is recommended on Staff Picks! 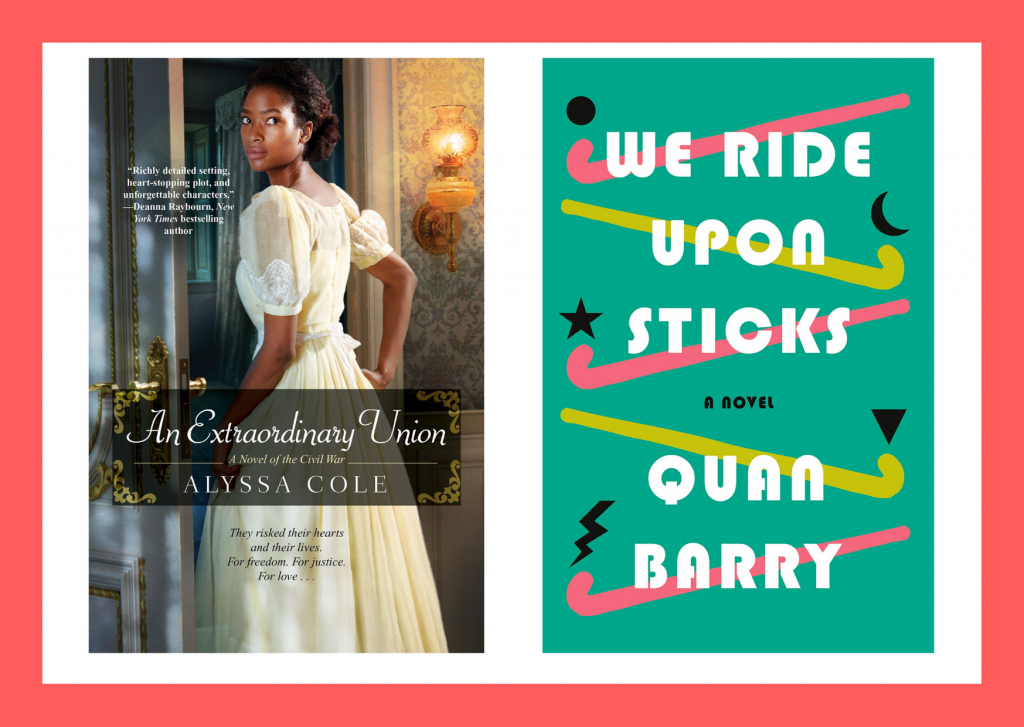 I am excited to read Alyssa Cole’s An Extraordinary Union, a historical romance and spy novel that takes place during the US Civil War. I devoured Alyssa’s Reluctant Royals series and have no doubt this book will be just as spectacular.

We Ride Upon Sticks by Quan Barry follows a high school field hockey team from Danvers, Massachusetts (formerly Salem Village) in the 1980’s. After a depressing defeat, and thinking of the women who were tried for witchcraft three centuries earlier, the members pledge allegiance to a notebook bearing the image of Emilio Estevez. When the official season starts and the Falcons start winning games, the girls feel Emilio pushing them toward their more devilish impulses. As they cause increasing mayhem around Danvers, the team can feel Emilio demanding more from them, and they worry they won’t be able to keep the magic going long enough to win the state championship.

Barry (also the author of She Weeps Each Time You’re Born) is deeply witty, writing the narrator as a sort of omniscient group-think, the team speaking as one wry voice. Barry spends time with each of the team members and examines their struggles with the gender norms of the late 1980s as well as with race, identity, family, and friendship. Three of the characters are women of color who have complex relationships to being surrounded mostly by white people; a few of the girls discover budding nuance in their sexuality; and they all start to wonder if witchcraft is really about taking up space in a world that wants to keep you small. As Emilio pushes them further down the path of darkness, readers will cheer them on because what they’re really doing is learning to be fully and authentically themselves. Touching, hilarious, and deeply satisfying. 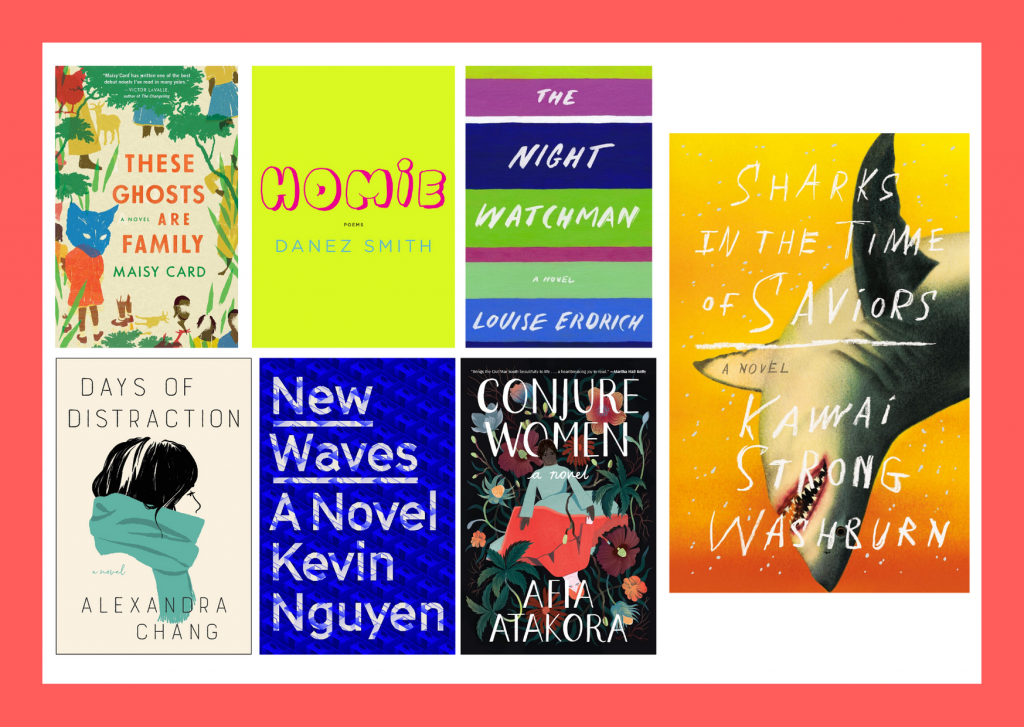 Technology. Magic. Folklore. Friendship, history, revenge, revelation: time for new books! There’s a heap from favorite and new authors coming out this spring. Danez Smith’s new poetry collection, Homie, is out, and Louise Erdrich has a new novel in March—The Night Watchman, based on the life of her grandfather.  I’m also looking forward to a bunch of great-looking fiction debuts, including New Waves by Kevin Nguyen, Sharks in the Time of Saviors by Kawai Strong Washburn, These Ghosts Are Family by Maisy Card, Conjure Women by Afia Atakora, and Days of Distraction by Alexandra Chang. 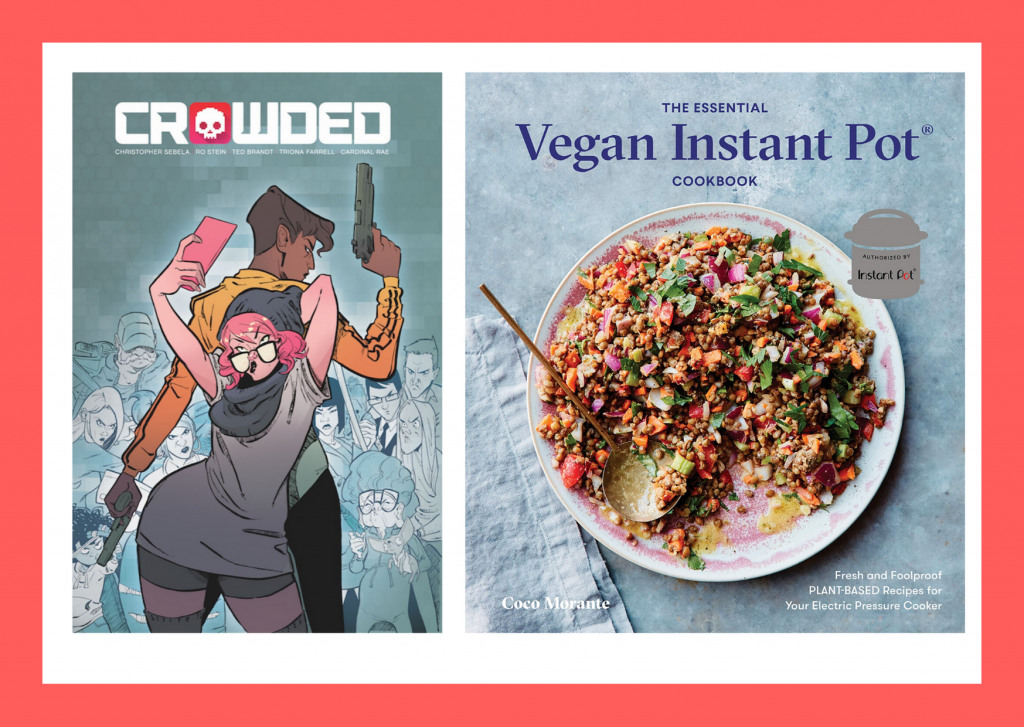 I spent New Year’s in the company of friends who are graphic novel connoisseurs. While browsing their shelves, I discovered the first volume of Crowded, which collects the first six issues of the comic and poses a horrifying idea: what if the most coveted paycheck in the gig economy were a human life?

Charlie wakes up one morning to discover a campaign was created on Reapr—a legal assassination app—in her name. The campaign has thousands of backers, and the first person to assassinate her stands to make over a million dollars. Charlie hires Vita, a bodyguard with low online ratings, to keep her safe until the campaign ends in one month.

I began reading Crowded as New Year’s Eve crested into New Year’s Day, and I didn’t stop until it was finished. The story is fast-paced, the characters are delightful, and the premise is just familiar enough on the cusp of this new decade to leave you wanting more (and please let “more” be an ending that isn’t global catastrophe!). If you like character-driven stories with a sinister undertone that still make you spontaneously guffaw, I suggest checking Crowded out.

Minestrone, Beluga Lentils with Kale, and all the timings for beans, grains, and vegetables! I love my Instant Pot and The Essential Vegan Instant Pot: Fresh and Foolproof Plant-based Recipes for your Electric Pressure Cooker by Coco Morante has become my go to for ideas. And the minestrone is now a weekly favorite at our house. 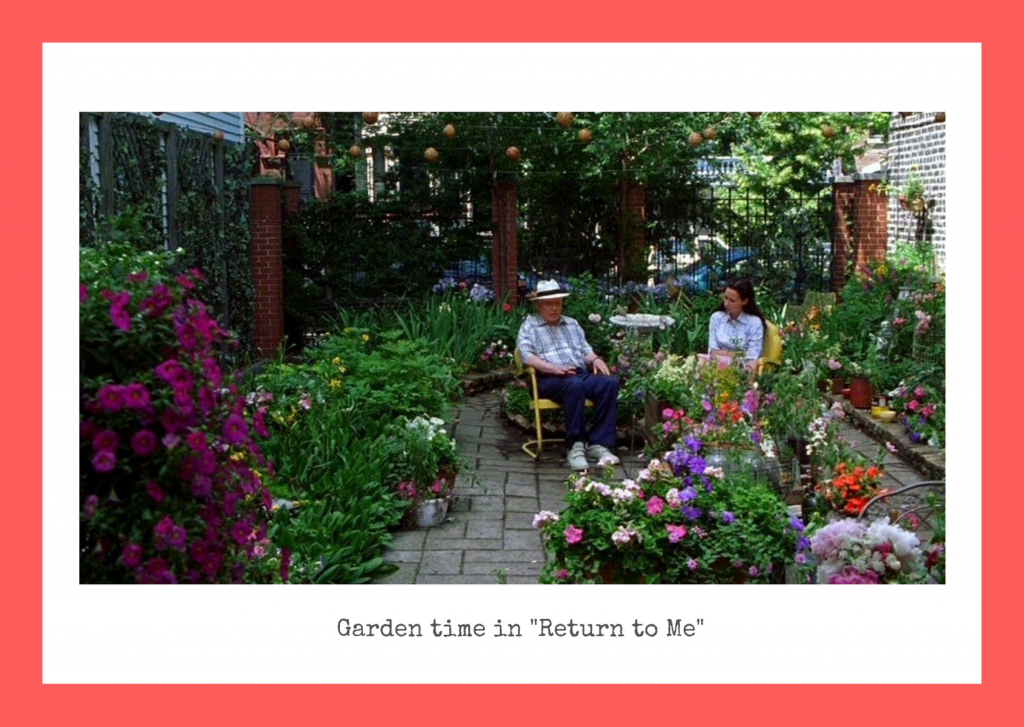 Hearts and flowers and love.  That’s what you get when you sit down with the 2000 movie Return to Me.

Grace Briggs, played by Minnie Driver, tends an urban garden behind Grandpa’s Irish-Italian restaurant, her plants thriving as she accustoms herself to a post-heart transplant life of promise and possibility.  Color celebrates this simultaneously lucky and tragic gift of a future in her fanciful watercolors painted in the garden, but her hopes reach beyond the garden fence and close circle of dear family. Life awaits even as she is drowning in their love.

The cast is an absolute dream, and the relationships they create on screen feel right and natural.  In his last film, Carroll O’Connor, as Grace’s grandpa Marty, reminds me of Irish Catholic gentlemen in my own life, with his devoutly clutched beads and earnest faith that prayers are always heard.  Bonnie Hunt, multitasking as co-writer and director, also plays Megan, Grace’s confidante, with hopeful realism and a sense of the absurd that finds honesty in any circumstances.  It doesn’t hurt that her foil is James Belushi as Joe, Megan’s husband and dad to their several unruly children; Joe is a master of unintended silliness, especially when life is at its most chaotic.  David Duchovny is Bob, a young widower just allowing light to penetrate his enormous grief, both baffled and bolstered by the possibility of joy after a chance encounter with Grace.  Good friend Charlie (David Alan Grier), who has tried his best to cajole Bob back into life with offers of unpromising blind dates, is bemused to find that Bob has been adopted by his new silver-haired widowed friends (O’Connor, Robert Loggia, William Bronder, Eddie Jones) and is now happily bowling, begad!, albeit badly, with Grace’s extended family.  The scene of Bob’s induction into the after-hours poker game at O’Reilly’s Italian Restaurant wins my heart every time I see it; and accompanying them all to the bowling alley is a sure-fire antidote for what ails me, even in February, which sometimes feels like an ailment all on its own.

The film is more confection than perfection, I suppose, with its predictably improbable bumps in the road.  The plot may be far-fetched, but so is life, as often as not.  As with life, it goes down better because of the small delights along the way, and Return to Me is chock full of small delights and scenes of everyday love.

Every time I see it, it makes me happy.

As ever, thank you for reading! We share our staff picks of favorite library materials here at the Life of the Library blog each month. If you are looking for more reading ideas, try filling out a Your Next (Great!) Read form to get a personalized list of reading suggestions from our Reader’s Advisory Staff, or check out our booklists.