Among the Portland Room’s many treasures are five scrapbooks, each one the color of dirty dishwater with a title embossed in gold on the front. The titles are: Cutting, Folding, Sewing, Weaving. (The fifth scrapbook is missing its cover.)

Cover of one of the workbooks

All that we know about these books is that they are called “Kindergarten Teacher Training Workbooks” and that they were created by Marion P. Dana. Once you get past the unassuming covers, there are aesthetic delights inside: brown and yellow paper woven into intricate, geometric patterns in the Weaving scrapbook, simple stitched outlines of shapes in the Sewing book. 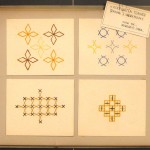 Page from the workbook titled “Sewing”

Marion Dana was born in Westbrook. After attending Wheaton College, she taught kindergarten, then went on to obtain both a bachelor’s and a master’s degree in education from Columbia University in the early and mid-1920s. She taught for over 20 years at the teacher’s college in Buffalo, NY.

Were these notebooks created for one of Dana’s classes at Buffalo, for her own studies at Columbia, or during her days as a kindergarten teacher? We simply don’t know. 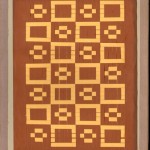 Page from the workbook titled “Weaving”

We do know a little bit about the recommended curriculum for kindergarten students in the early 20th century, thanks to a 1919 booklet published by the Department of the Interior’s Bureau of Education (http://files.eric.ed.gov/fulltext/ED541152.pdf). Teachers were expected to explore the following topics with their young scholars: Community Life and Nature Study, Manual Activities, Art, Language, Literature, Plays and Games, and Music. Cutting, weaving, and sewing are among the manual activities discussed. Sewing, for example, “is occasionally introduced for the production of articles which can be used by the child; for example, a pocketbook for the store play, a postman’s bag, etc. The simple overhand stitch is used. … The needs of the kindergarten dolls furnish a most natural and interesting motive.”

Dana’s workbooks are now on display on the Lower Level of the Main branch. When not on display, they are housed in the collections of the Portland Room. If anyone knows more about Marion Dana, we would love to hear from you. Please contact us at (207) 871-1700 x747 or portlandroom@portland.lib.me.us.