Saved Searches Advanced Search
UPDATE 4/3: NEW DATE: All Library locations are closed until Monday, May 4. As we receive new information, we will update you on our website and social media. Please hold onto all library materials as staff will not be in the building. There will be no overdue fees incurred during this time. See our COVID-19 information page for links to current health information. Reference will be answering questions Mon-Sat, 10am-4pm, 871-1700 x725. If you would like to open a temporary eResource library card, please email us at lending@portlib.org
X 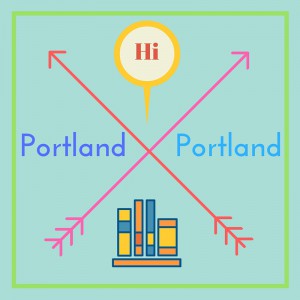 Portland Public Library is the library serving the city of Portland, Maine. The library system serving the city on the West Coast—Portland, Oregon—is called Multnomah County Library. Yet a quick Internet search for “Portland Library” positions our library in Maine at the top of the search results —so naturally, each and every month, we get some calls or texts that baffle staff and patrons alike until geographical distinctions are sorted out. But the puzzlement usually brings a smile. Our library colleagues love swapping stories about all the confusion between PWM (Maine) and PDX (Oregon).

Here’s a collection of our favorite tales of two cities.

A message arrived recently in our Ask-A-Librarian chat box: “What are the retirement communities in Portland like? Can you send me some information about retiring in Portland?” We sent back a variety of information, including links to retirement homes and a Wall Street Journal article about the benefits of fresh sea air. The patron wrote back that they had been looking for information about Oregon, but were now considering retirement in Maine!

The Public Computing area at PPL includes 3D printing services. Patrons email us their files and we correspond with a few questions and notify them when their 3D printed item is ready to be picked up. A patron called, excitedly asking for directions to the Main Branch so he could pick up his 3D print job. The staff person on the phone gave instructions for Congress Street and Elm Street, and the patron kept asking where these streets were in relation to 10th Avenue. There is no 10th Avenue in Portland, Maine, and he sheepishly admitted he was from Oregon. The patron offered to pay shipping for his 3D print job, or asked if we could donate it to someone locally—which we did, when someone serendipitously emailed the same file to be printed later that week!

Administration gets calls so frequently for Oregon-centric directions and parking that they’re able to give directions to the Multnomah County Central Library.

A Reference Librarian was similarly fielding a directions call. The patron on the line asked where the library was in relation to Boise, Idaho, where he was driving to the library from. The librarian earnestly answered: “East!” This earned a chuckle from both ends of the call.

Both Portland Public Library and the Multnomah County Library offer hoopla (a streaming video and music service à la Netflix), but selecting “Portland Public Library” and trying to log in with your Oregon library card is liable to frustrate. One of our staff fielded a call recently from someone struggling to get their library card to work with hoopla. Asking for a library card number clears up many mysteries for us, and it was soon clear the caller was not in Maine. But after learning he’d reached the wrong library in the wrong state, the caller was completely unfazed and asked for help with downloading his title anyway. Our staff member walked him through finding and selecting “Multnomah County Library” on the menu for hoopla access. We love our Oregon patrons, too!

A Reference Librarian spent a considerable amount of time on the phone with a person looking for a title that was available at PPL’s Burbank branch. Since the patron didn’t know where Burbank was, he asked if the book could be sent to Hillsdale instead. “Where are you calling from, sir?” concluded that call.

PPL receives advance copies of books from publishers that they think we might be interested in purchasing eventually. Our selector shelves frequently contain beautiful books about the Pacific Northwest, Vancouver travel, and Oregon history. The ME in PPL’s address must not have been a tip-off when these gracious publishers addressed their packages. We’ve been wondering if Multnomah County Librarians get advance copies of books on lighthouses in New England.

The Chat with a Librarian service at PPL gets so many questions asking for the city on the West Coast, we have a saved response:

While it is clear to us here in Maine that our Portland should be the first one that comes to mind—Portland, ME was founded in 1786 after all, more than fifty years before Portland, OR—Portland East Coast is still more than eight times smaller than Portland West Coast. That’s a population of 66,194 versus a population of…583,776. (Thus: so many more people with questions needing answers!) Why aren’t callers tipped off by the 207 area code when they’re dialing the number for the “Portland library”? Maine only has one area code, so all calls are local calls in Maine. Oregon, though, has four area codes, so 207 might just get lost in the shuffle.

Besides our names, Portland and Portland have a lot in common. Portland seems to be the coffee capital on the East Coast and on the West Coast; one travel site calls PWM the beer capital of the world, while CNN gives this distinction to PDX. PWM has a growing housing problem: PDX too.  We also care about being sustainable cities—Portland, ME has a sustainability initiative, as does  Portland, OR. Most importantly? Both Portland libraries have a history of awesome Bookmobiles (see below).

We love to think that the work we do in Maine affects people all the way across the country. Since we’re three hours ahead, it’s nice to imagine that while our West Coast colleagues are busy waking up and getting their library open, we’re picking up some of their urgent calls—and likewise, maybe after PPL closes for the evening, the other Portland is helping keep our night owls stocked with eBooks.

In the meanwhile, if anyone needs directions to the library in Portland, England, or Portland, Australia—we’re ready! 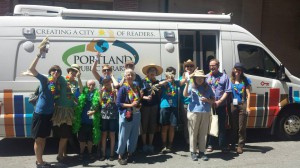 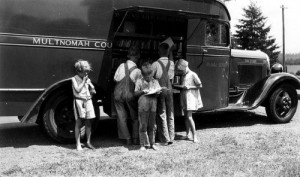 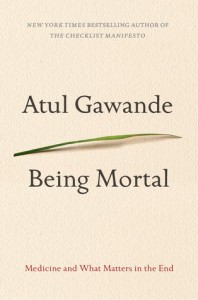 Over the past several months, PPL has held a range of discussion groups on the best-selling and oft-borrowed Being Mortal by Dr. Atul Gawande. Made possible by a generous grant from the John T. Gorman Foundation, our program engaged nearly 500 individuals – from independent seniors and family members, to assisted living residents and staff, to medical professionals

Our goals for the program were to help participants have wider understanding of the end-of-life experience for most Americans in this era, to have a way to develop and articulate their own perspective on the question of quality of life vs. quantity of time remaining, and to feel empowered to have thoughtful, necessary discussions on end-of-life issues with their families and caregivers.

We have received tremendous feedback from host facilities and from participants alike. PPL takes very seriously our vision of helping citizens be more literate, informed, and engaged, and we are gratified by participants’ appreciation for the our help in framing these critical conversations.

Maggie Richards Editor at Henry Holt, has provided us with the outline and discussion guide that Dr. Gawande uses himself when he speaks with groups about the book. This guide will be included in the upcoming October release of the paperback but is not in any of the current editions; we are delighted that Dr. Gawande’s publisher has entrusted it to us. You can download the guide here.

Additional discussion group guidelines – developed by our facilitators and with various audiences in mind – will be made available on our website shortly. We hope other libraries, individual book groups, and organizations that wish to initiate these critical conversations will find them useful.

If your book group would like to explore this topic, please be in touch with us by email at gilliss@portlib.org or at 207-871-1700 ext. 717 for details on how to borrow multiple copies of Being Mortal and use our supplied discussion guides to begin conversations.

Long-time Portland movie resource Videoport has announced that the store will cease operation in late August after 28 years serving the community. As part of the closing process, Videoport owner Bill Duggan has worked with Portland Public Library to donate the store’s collection of more than 18,000 DVD titles. The gift effectively doubles the Library’s existing DVD collection, adding tremendous depth to the resources available to patrons. “We are pleased PPL is going to to take on the Videoport collection and keep it available to all,” said Duggan

“Videoport has had a unique and important impact in the Portland community with its high-quality, wonderfully diverse collection, and we are sorry to see it close its doors,” says PPL Executive Director Sarah Campbell. “We are so grateful that Videoport has chosen to make this gift to the Library, and plans are underway to incorporate their collection into the PPL holdings as quickly as possible. We know our patrons will benefit tremendously from this gift.”

In addition to its DVD collection, PPL offers video streaming service via Hoopla and also hosts regular film screenings and film festivals. “Our patrons and visitors value film as a way to experience great stories, and to engage with ideas and with their community,” Campbell said. “We hope that as dedicated Videoport customers access these holdings at PPL, they will also enjoy our film-related programs and will share in these events.”