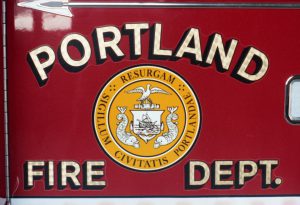 Portland’s esteemed and much-loved Fire Department celebrates its 250th anniversary this month. The City of Portland will recognize two-and-a-half centuries of the Fire Department’s service, with a special proclamation and observance at the Portland Fire Museum, on March 29th. Joining this extraordinary commemoration, the Library’s Portland Room is now exhibiting artifacts and photographs that attest to the brilliant history of the Portland Fire Department. 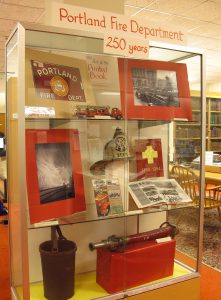 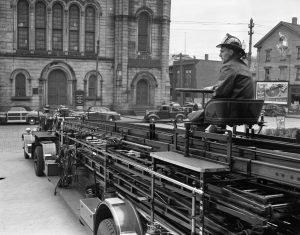 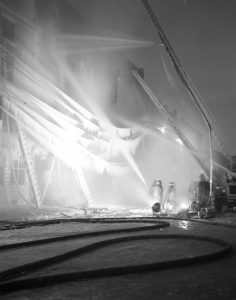 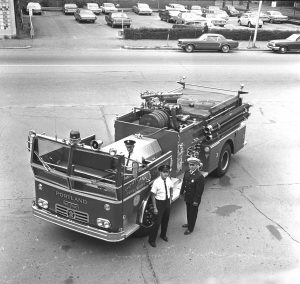 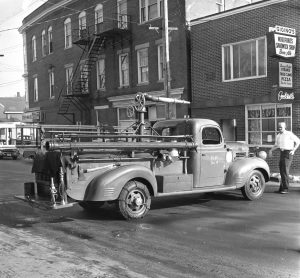 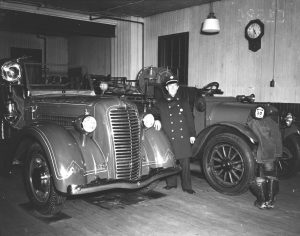 Below: Views from the Portland Room archival exhibit: 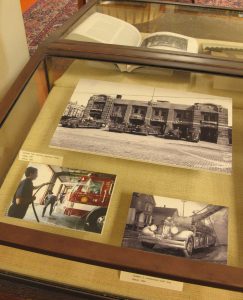 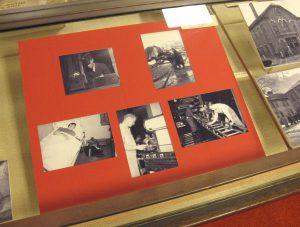 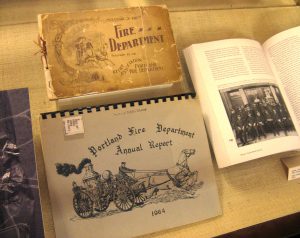 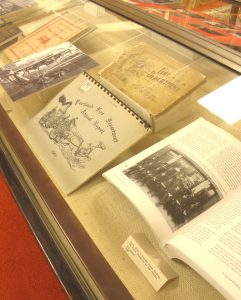 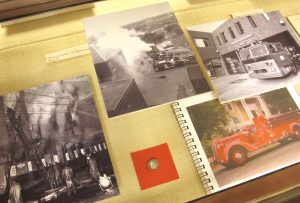 Additional artifacts, such as a leather bucket, an antique Portland fire helmet, and a hose nozzle from an East Deering firehouse, have been lent by the Portland Fire Museum for the exhibit.
Below: Another ladder rescue, this time by Fireman Joseph R. Miller, on October 19, 1955. 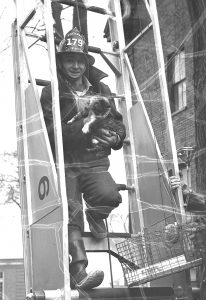 Come on up and check out the exhibit!
The Portland Room is open Mondays-Thursdays, 10am-7pm; Fridays, 10am-6pm.

___________________________
Archivist’s postscriptum:
During the processing (arrangement, description, and archival rehousing) of our large collection of photographic still film, I discovered a negative which had unusual crayon lines drawn across both sides: 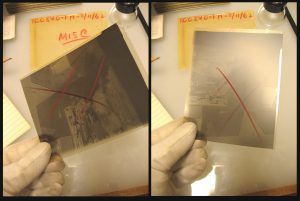 A series of immersion baths in distilled water and Photo-Flo 200 wetting agent loosened the crayon marks from both the emulsion and acetate-base sides of the film, allowing me to completely remove the marks with cotton swabs: 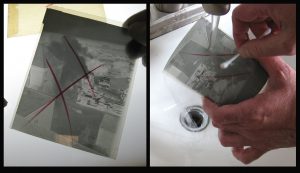 The scanned image reveals the scene of a fire at Maine Medical Center, on August 11, 1962, and now the visual information is preserved. 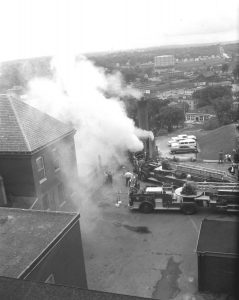 Last night we co-hosted a screening of The Mask You Live In with Maine Boys to Men. Since 1998, Maine Boys to Men has served entire communities by helping boys reach their potential to become emotionally healthy, respectful, non-violent men. The film follows boys and young men as they struggle to stay true to themselves while negotiating America’s narrow definition of masculinity. Research shows that compared to girls, boys in the U.S. are more likely to be diagnosed with a behavior disorder, prescribed stimulant medications, fail out of school, binge drink, commit a violent crime, and/or take their own lives. The film sparked great conversation during our Q&A time after the screening.

You can find additional resources here: The Mask You Live in.

Ken Burns has become known as America’s historian, and his 18-hour documentary, over ten years in the making, might be the definitive explication of America’s involvement in Vietnam.

Or not. Certainly, like the war itself, the film is controversial.

David Kamp of Vanity Fair calls it “monumental” and “scrupulously evenhanded.” Todd VanDerWerff of Vox calls it “a staggering achievement,” while others accuse Burns of relying too heavily on the corporate sponsorship of Bank of America and accordingly whitewashing the imperialism of the United States, and some claim that the film is flawed because the filmmakers, like many Americans, lack a basic understanding of Vietnamese history and politics.

I couldn’t possibly know more about the Vietnam war than Ken Burns (who, along with his directing partner Lynn Novick, interviewed hundreds of people–American and Vietnamese government officials, soldiers, and civilians) but I did notice some omissions.

For example, Burns claims that the war was begun “in good faith by decent people out of fateful misunderstandings” (a questionable assertion in itself) but he never really explores the reasons why it continued for so long beyond the face-saving, election-year machinations of each successive president. There’s not much attention given to the corporations who profited from the manufacture and sales of all those weapons and tanks and helicopters, not to mention napalm and Agent Orange. Burns shows us students occupying administrative buildings on campus to demand Black Studies classes, but wouldn’t it be more relevant to talk about the occupying students who demanded that the school divest its holdings in Dow Chemical?

Still, Burns manages, at times, to powerfully evoke the divisiveness and the heartbreak that haunt us to this day. At times the movie seems as endless and exhausting as the war itself, and that is to its credit. Some critics have accused Burns of being repetitive, but I can forgive that, because some things bear repeating, such as that kill ratios are an unconscionable objective and a horrible standard for judging the success of a military operation. You can’t make that point too many times.

Difficult as it is to watch, The Vietnam War is worth seeing. Is it the only Vietnam film you’ll ever need? No, but don’t worry. The Library has you covered.

For supplemental movies to watch while you’re waiting, click here.