This summer, Portland Public Library was awarded the Inclusive Internship Initiative grant from the Public Library Association to fund a paid, teen intern. Hussein Maow, 16, was selected from over 25 applicants. Here is what he learned this summer at PPL:

Working at the library this summer has been an amazing experience. I have learned what it truly means to be a librarian. What we patrons see from the outside isn’t always what is true. I have learned that the stereotypes that librarians are given are always most likely unrealistic. My definition of a librarian isn’t a librarian who reads books all day and shushes people when they get the chance, my definition is a skilled person who is kind and energetic. They are dedicated to serving patrons in technology and research needs. 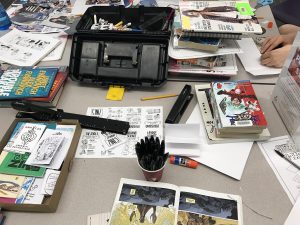 Helping the children’s librarians with their workshops made me realize that we need to be aware of the education essentials newborns need throughout their time of growing. Working with the children’s librarians has shown me how fun and interactive it is working with children. They give children the time to express who they are and what their growing minds are passionate about. The children’s play area is warm, comforting and colorful. They befriend every family that comes in through the door, so that the children feel like the library is their educational home. 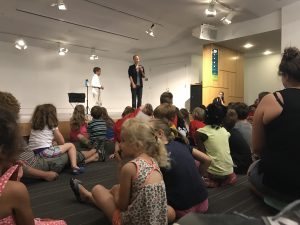 When I was told the library has an outreach program for the elderly who don’t have the ability to travel anymore, I was amazed and interested to learn about it. I instantly wanted to go with the outreach head librarian. My first experience going out with the outreach team was unbelievable because they made every patron’s day. Every elderly patron that came in through the door was lit up with a big smile on their face. The head librarian and her team are kind, inviting and soft spoken. They reach every person whether they live in a retirement home or by themselves.

Through my time at the library, the PC desk has been the most diverse place in the library. Nowadays everything is online, but sometimes it’s hard for people to have access to a computer, so the library created a place where every patron who comes in has free access to computers and internet. This taught me that there’s always a way of helping people help themselves.

Overall I have learned a lot throughout my time here. Being a librarian isn’t always easy but the work they put in and the joy they get when they make someone’s day makes up for it. I have learned that librarians fight for the right of their patrons whether it’s educational or experiential needs of the people they serve. They strive for the safety and privacy of every person who comes in through their doors. 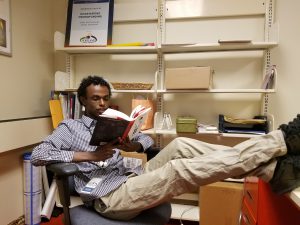 Hussein will be a Junior at South Portland High School this year. He is also an active member of the PPL Teen Advisory Board and will continue to help make PPL an inclusive and inviting place to be.

PPL is dedicated to offering excellent content in convenient ways. Sometimes we find ourselves needing to change the resources we provide. After careful consideration, we will no longer provide the hoopla digital online streaming service as of Thursday, August 31, 2017 at 8:00 pm.

Hoopla’s pay-per-use pricing model and pre-selected content is no longer a good fit for Portland Public Library. A more responsible use of our donor-supported collections budget is to increase the breadth of titles and number of copies in our other eBook and eAudiobook service, Cloud Library, to improve quality and access, and decrease hold times.

As always, we appreciate your support of Portland Public Library, and we welcome your feedback whenever we make changes in our collection and services.

For current hoopla users, hoopla will honor the full borrowing period for materials checked out prior to the cutoff time. 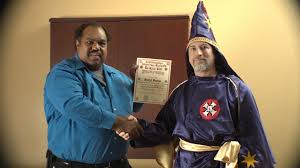 Is it possible that Donald Trump was right when he said there are many fine people among white supremacists? Can deplorable beliefs be separated from the people who believe them? Can people change? What is worth risking to find out?

“Let me tell you a story,” Daryl Davis says at the beginning of “Accidental Courtesy,” and he proceeds to tell a story–one of many–about how he befriended some members of the Ku Klux Klan.

Davis is a black man in his late fifties, a Grammy Award winning musician who has played with the likes of Little Richard, Jerry Lee Lewis, B.B. King, and Chuck Berry. He is also an actor, and the author of a book called “Klan-destine Relationships: A Black Man’s Odyssey in the Ku Klux Klan.”

Since 1983, Davis has made it his mission to sit down with Klan members and talk with them about their beliefs. His original goal was to find the answer to a question that has plagued him since childhood: How can someone hate him when they know nothing about him?

What he has found, he says, is that hate is rooted in fear, and fear can be overcome. As evidence of this, Davis displays a collection of high level Klan garments–robes and hoods belonging to Imperial Wizards and Grand Dragons and whatnot–that were given to him by Klan members who ultimately left the Klan because their association with Davis changed their beliefs. Says Davis:

“The most important thing I learned is that when you are actively learning about someone else you are passively teaching them about yourself. So if you have an adversary with an opposing point of view, give that person a platform. Allow them to air that point of view, regardless of how extreme it may be…

[C]hallenge them…politely and intelligently. And when you do things that way chances are they will reciprocate and give you a platform. So he [Roger Kelly, former Grand Dragon] and I would sit down and listen to one another over a period of time. And the cement that held his ideas together began to get cracks in it. And then it began to crumble. And then it fell apart.”

Davis and Kelly are now friends, and Davis is godfather to Kelly’s daughter.

We often say that Americans need to have a conversation about race, but with whom should we have it, and of what should it consist? As Davis points out, if a group of people who all agree that racism is bad get together and talk about how bad racism is, what is being accomplished?

Certainly Davis’s approach is not for everyone, and the movie documents some of his conversations with people from the Southern Poverty Law Center and the Black Lives Matter movement, who clearly take a different view of how to deal with hate groups. Which is not to say that one approach is right and another is wrong; the Southern Poverty Law Center has shut down entire chapters of the Klan, while Davis has converted perhaps two or three dozen people, not by setting out to convert, but by making genuine human connections, with humor and compassion. By listening, and trying to understand.

This film, directed by Matthew Ornstein, has won numerous international awards and special prizes, including Special Jury Recognition for a Portrait Documentary at the SXSW Film Festival, the Jury’s Recognition for a Film that Provokes Continued Conversation at the Athens International Film and Video Festival, and the Nashville Public Television Human Spirit Award.

Ornstein opens the film with a quote from Robert F. Kennedy, one that is worth repeating here:

“Few will have the greatness to bend history itself, but each of us can work to change a small portion of events, and in the total of all those acts will be written the history of [each] generation.”

To request a copy of this film click here.