Join the Choose Civility Initiative tomorrow, November 25th at 7:30 am  for a Thanksgiving week public conversation on the topic of “participating.”

Thanksgiving asks us to amplify a spirit of generosity and inclusion that we hope to find in ourselves and our communities throughout the year.  Despite high levels of perceived incivility in our culture, we also live in a time where “giving” happens frequently, in formal and informal ways. The connection between thankfulness, service and a stronger community is robust — that is, we know that when everyday people give their time and energy to strengthen their communities it serves everyone… but we also know that civic engagement is sometimes easier said than done.

Tomorrow (November 25th) we will share strategies for increasing pathways to civic engagement, share stories of how and why volunteering matters, and tackle some of the obstacles that make volunteering hard.  We will also feature a dozen area nonprofits to share a sample of volunteer opportunities available now!Among the organizations participating, we will learn from the United Way of Greater Portland, Maine Animal Refuge League, Learning Works, the Maine Tool Library, League of Women Voters, Lift 360 and more!

Also happening this week: MPBN will offer a special “Maine Calling” on the topic of Thankfulness on Wednesday.  MPBN and the Maine Community Foundation are sharing  “Voices of Giving” throughout this month, documenting all sorts of reasons that people choose to give their time, money, and other care.   Bangor Daily News is sharing stories of people for whom the rest of us “should be thankful.”  We offer books on thankfulness, including this wonderful list of poems.

As the famous Stompin’ Tom Connors song goes, “the good old hockey game is the best game you can name,” and many local fans know this tune from our visits to our local arenas. Portland’s Cross Insurance Arena, the renamed and refurbished Cumberland County Civic Center, has been home to the Maine Mariners of yore (1977-1992), the Portland Pirates (1993-2016), and the new ECHL Maine Mariners (since 2018).  Years of exciting games and American Hockey League (AHL) Calder Cup Championships have been won by our local teams. Here’s a salute to professional hockey in the Greater Portland area.

Ice hockey has been played in the Portland area for much longer than professional leagues have been here- especially in local colleges (notably the University of Maine and Bowdoin College), as well as unorganized pond hockey. Before the arrival of the Maine Mariners (1977), in the brand-new Civic Center, an influential team was filling the stands at Le Colisée de Lewiston: The Maine Nordiques. 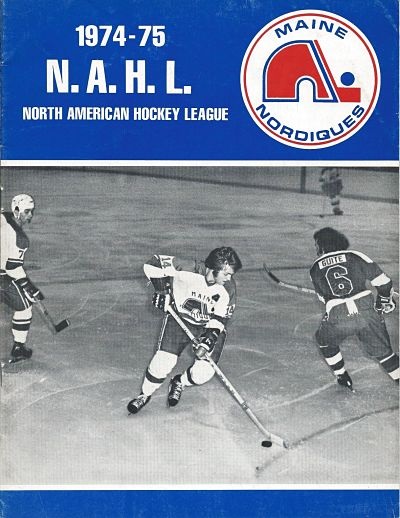 In the early and mid-1970s, Portland didn’t have an ice arena large enough for a professional team. The Nordiques’ success prompted the game you see in the 2 Portland Public Library archival photos immediately below, taken on October 23, 1974. The Maine Nordiques (affiliated with the Québec Nordiques) took on the Flames- and won the game handily, 11-2, at Riverside Arena in the North Deering section of Portland. 1,200 fans were at that game, and in retrospect we can imagine the turnout helped inspire the idea of building a professional arena for a downtown team! 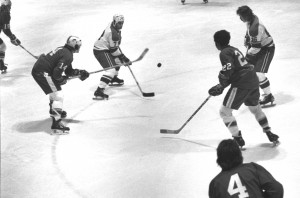 Maine Nordiques vs. Atlantic Flames, at Riverside in Portland.

A bit of sports trivia in the photo below: the Flames forward being thwarted by the Nordiques’ defense is
Mike O’Connell, who later played for- and coached the Boston Bruins. 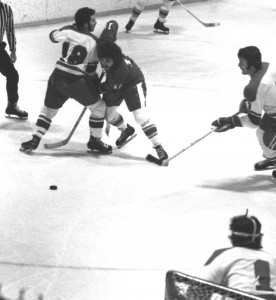 The Maine Mariners, based in Portland, won 3 Calder Cup championships and many playoff wins, in their 15 seasons here. Their affliates included the Philadelphia Flyers, the New Jersey Devils, and the Boston Bruins. In the program below, you may notice the “black and gold,” from the Mariners’ latter parent NHL team. In 1993, the Bruins moved the franchise to Providence, Rhode Island. 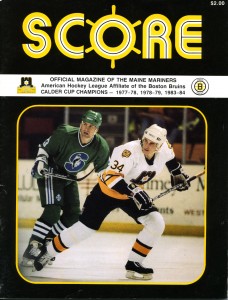 The two Library archival photos below are from the Maine Mariners’ first Calder Cup title. 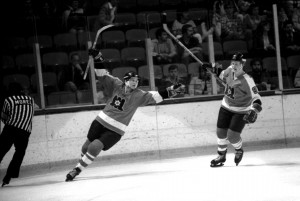 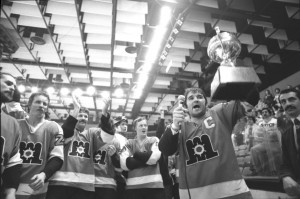 Fortunately, Portland hockey fans didn’t have to wait long for a new team to play here in the city. Just a year after the Maine Mariners became the Providence Bruins, the Portland Pirates began in fall 1993. 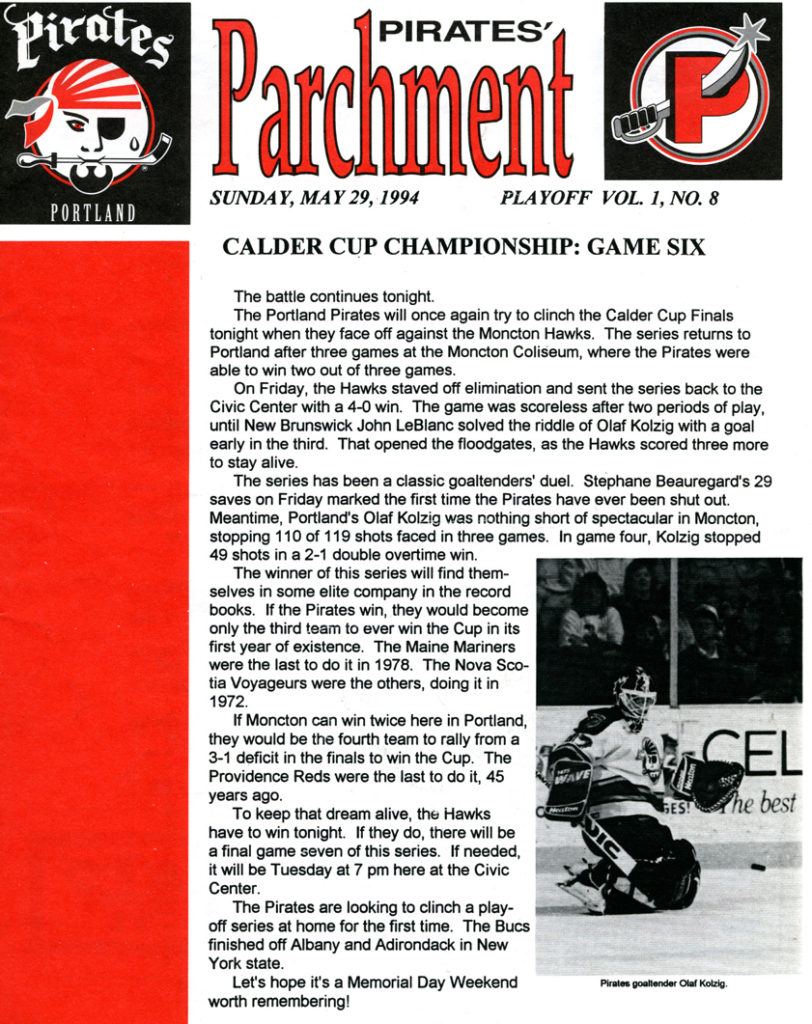 The Portland Pirates, originally affiliated with the NHL’s Washington Capitals flew out of the gates with their over-the-top home games and the Calder Cup, in 1994. Their current affiliate (after the Capitals, and the Buffalo Sabres) is the NHL’s Phoenix Coyotes. The Pirates’ final season in Portland was 2015-2016, just before the franchise moved to Springfield, Massachusetts.

Just below are some Library archival photos from the Calder Cup final in 1994. In 6 games, Portland defeated the Moncton Hawks. 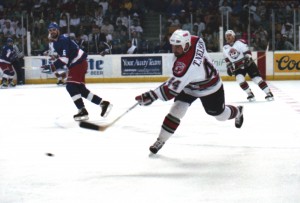 Above photo: Todd Nelson of the Pirates sends one in, with the Hawks in pursuit.

Below: Pirates goalie Olaf Kolzig makes a stop on Dan Bylsma of the Hawks.
(More trivia: Bylsma went on to coach the Stanley Cup-winning Pittsburgh Penguins.) 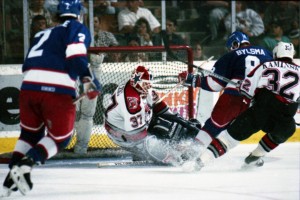 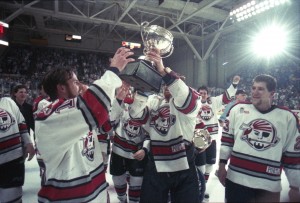 The Portland Pirates with the Calder Cup, on the ice on Free Street, and
(below) in front of Portland City Hall during the city’s festive parade and rally. 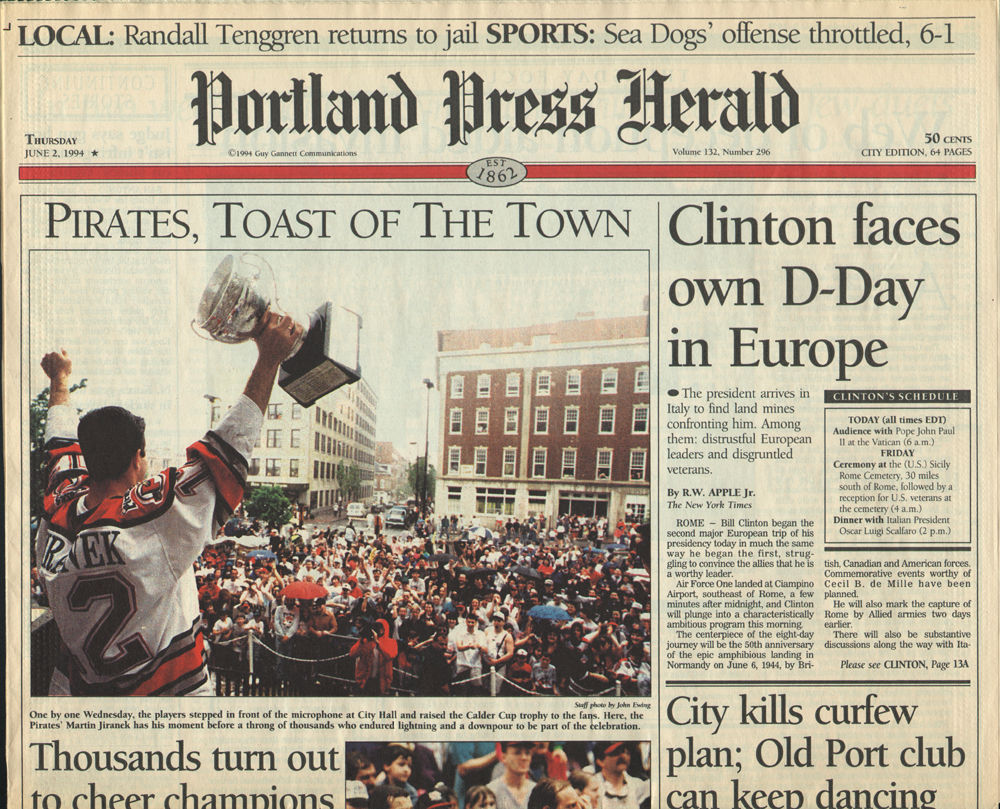 Some Portland-area hockey memorabilia:
The Nordiques, the Mariners, the Pirates,
and regional NHL favorites- the Boston Bruins. 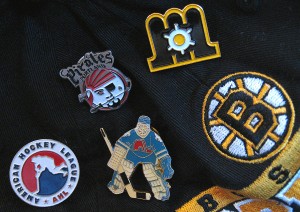 2020 UPDATE:  The old names become new again, as the East Coast Hockey League’s Maine Mariners began play, here in Portland, for the 2018-2019 season. The ECHL Mariners are part of the New York Rangers organization.
In February 2019, the new-edition Maine Nordiques, of the North American Hockey League were revived and play at the Colisée, “again.” 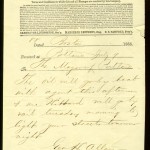 “The oil will go by boat with agent this afternoon & Mr. Hibbard will go by rail Tuesday morning to light your streets tomorrow night.”

These are the words that the Clerk of Boston’s Lamp Department telegraphed to the mayor of Portland on July 9, 1866, just several days after the devastating fire of 1866 wiped out most of Portland’s downtown and left about 10,000 people homeless. 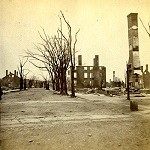 Stereoscopic view of Portland after the fire of 1866, taken by John P. Soule

This telegram is part of a remarkable collection that is housed in the library’s Portland Room. The collection, Relief for the Portland Sufferers: The Great Fire, 1866, documents the relief effort that was carried out in the wake of the conflagration. Mayors of towns and cities around the country, as well as individuals, wrote letters and sent telegrams to Augustus E. Stevens, Portland’s mayor, to express their sympathy and to offer help. Donations ranged from $1 (“which may aid some suffering family. I earned it cleaning the snow off the sidewalks last winter”) to thousands of dollars from organized relief funds. People also sent food, clothing, and other goods and services, like the Boston lamplighter’s offer to light the darkened streets of the city. Among the goods donated: a chest of oolong tea, a case of forks and knives, three train car-loads of lumber, 1000 feet of hose for the Fire Company, a supply of disinfectant.

Other people wrote to inquire about work opportunities, hoping to be hired to help rebuild the city. Still others inquired after family and friends. A little girl named Annie wrote this on behalf of her little sister, Alice: “PS Alice says that if you know “Suzy” and “Prudy Paslin,” give the money to them if they have been burned out.”

The collection includes hundreds of documents. A small selection has been digitized and can be seen here:

Copies of some of the letters and telegrams are on display in the Portland Room, along with the black metal box in which the documents were stored for years, tightly rolled up, before Portland Room staff found them and rehoused them in archival folders and boxes. We invite you to come up and see them for yourself!