8:46AM on Tuesday, September 11th, the lives of every single American changed. For the first time in several generations, America was under attack by outside sources. 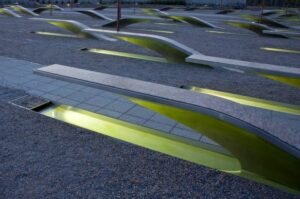 This would become a new generation’s Kennedy Assassination. An event where almost every American alive on that day, knew exactly where they were and what they were doing. Over 3,000 people perished in the attacks that hit the World Trade Center towers in New York City and the Pentagon in Washington D.C. Many first responders and clean-up workers were affected by elements in the debris, which led to various illnesses. The way we conducted our lives, the way we worked, the ways we viewed our neighbors, and the ways we travelled were changed forever. Twenty years have passed, but those who lost their lives in the attacks and in the wars that followed will never be forgotten.

If you need help speaking to young children regarding the attacks or with the topic of terrorism, click here.

For ideas on how to commemorate 9/11 on your own, please click here.

Fire officer Brenda Berkman was one of the many first responders during 9/11. Thirteen years later, she’s become an artist specializing in stone lithography. Much of her work depicts the evolving cityscape of Downtown Manhattan. From: CROWNING NEW YORK

Two months after the 9/11 attacks, the U.S. government created the Transportation Security Administration, or TSA. All the laws and protocols governing U.S. flight safety were about to change forever. From the Series: Air Disasters: The Pentagon Attack

Photojournalist John Harrington talks about the rare Pentagon photographs that he donated to the Smithsonian. From the series 9:11 – Stories in Fragments

Online Exhibit at the Smithsonian 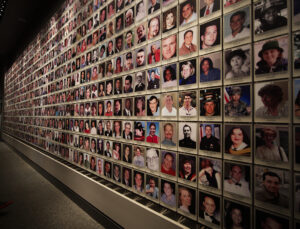 Memorial photograph wall of people killed at the World Trade Center Memorial and Museum in downtown Manhattan (borough) in New York City, built on the site of the terrorist attack that brought down the World Trade Center’s “Twin Towers” on what has become known simply as “9/11” – September 11, 2001