What’s so special about this book?

Thanks to the First Folio, generations have experienced Shakespeare’s lasting influence on language, culture, theater, music, education, and more. There are 233 known copies in the world today, with 82 copies held by the Folger Shakespeare Library. One of the most valuable printed books in the world, a First Folio sold for $6.2 million in 2001 at Christie’s and another one for $5.2 million in 2006 in London. It originally sold for one British pound (20 shillings)—about $200 today.

From Shakespeare aficionados to students studying the Bard’s plays for the first time, this exhibit is a rare opportunity for people in Maine to experience one of the most influential books in history. 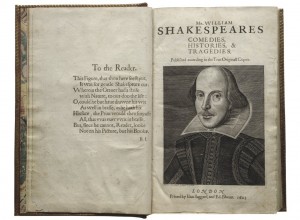 How did this national tour come together? How did PPL become involved?

2016 marks the 400th anniversary of Shakespeare’s death. To celebrate more than 400 years of Shakespearean influence on our language and our collective imaginations, the Folger Shakespeare Library has mounted this national tour of the First Folio. During 2016, First Folio! The Book that Gave Us Shakespeare will tour all 50 states, Washington, DC, and Puerto Rico. Portland Public Library is pleased to be one of only five public libraries to serve as a host site.

First Folio! The Book that Gave Us Shakespeare has been made possible in part by a major grant from the National Endowment for the Humanities: Exploring the human endeavor, and by the generous support of Google.org and Vinton and Sigrid Cerf.

Portland Public Library and our exhibit partners Maine Humanities Council and USM Libraries were selected as the Maine tour location. We thank our local sponsors and funders for enabling us to host the First Folio and to offer a wide range of programs for all ages and audiences. Many thanks to the Davis Family Foundation for their leadership support and to sponsors TD Bank, HM Payson, University of Southern Maine, and the Fogler Library. 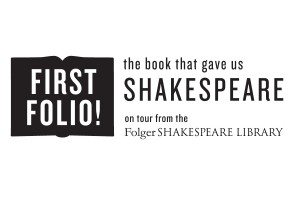