Saved Searches Advanced Search
Use these quick links to find PPL Services during COVID19.
NOTE: ALL LIBRARY LOCATIONS ARE OFFERING ONLINE AND TO-GO SERVICES (no appointment necessary).
PPL To Go: How to pick up your Holds.
PPL Printing To Go is still available at the Main Library on Congress St.
COVID19 Resources: Find trusted information and city/state updates, with some information available in many languages.
2021 Tax Resources: Information on tax forms and assistance available during the pandemic.
X 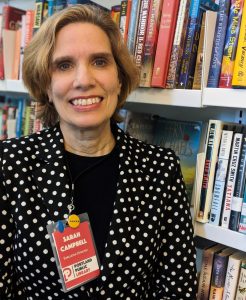 As your Library, we are grateful for our patrons and our partners with whom we can create conversation, illumination, and togetherness year-round!

How about one of these for your new year’s resolution? Use the Library in a way you’ve never tried!

Have you tried e-books and e-audiobooks for adults or Tumble Books for kids?

Check out a science backpack or a telescope for a self-guided adventure!

Build the community’s environmental resilience by participating in our Sustainability Series (now in its 3rd year)!

Get started on your winning idea in one of our Business Workshops.

Make your next book group easier by checking out a book discussion set (multiple copies of one title in various formats).

All of this is amazing… and free…because of the generous support of our patrons, our neighbors, and our community. We are proud to be your Library where, every day, we share the whole truth … and some fiction! 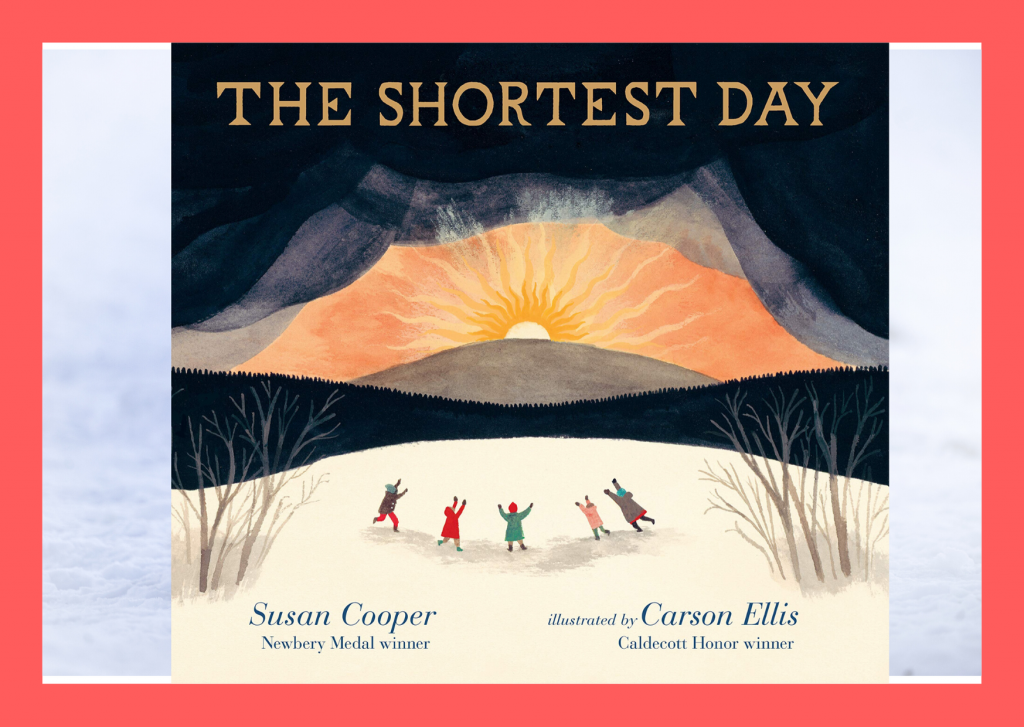 “So the shortest day came / and the year died, / And everywhere down the centuries of the snow-white world / Came people singing, dancing, / To drive the dark away…” So begins Susan Cooper’s poem The Shortest Day, just published in picture book form with gouache illustrations by Carson Ellis. Cooper’s words and Ellis’s pictures, through the holding of hands and the melding of voices, journey the reader through the darkest day of the year into a joyful horizon.

At the winter solstice, an instinct for reflection and a yearning for regeneration colors my reading. I think about all of the Mary Oliver poems I reread this year, knowing she wouldn’t write any more. The early spring mornings waiting for the bus, reading Ross Gay’s Book of Delights as a spell against the still-biting cold. The lines from Julia Phillip’s debut novel Disappearing Earth that, months after reading, I find myself repeating under my breath as I go about the day. And now I’m ending the year reveling in Carrying Water to the Field, Joyce Sutphen’s new and selected poems, full of farm life and people: a hardworking father, lost loves, and an aging grandmother gradually loosening her hold on the land.

Just as Cooper and Ellis gently us urge toward the sun, Sutphen speaks in “From Out the Cave” of a moment when “in the midst of these / everyday nightmares, you / understand that you could / wake up, / you could turn / and go back / to the last thing you / remember doing / with your whole heart.” Perhaps another line to repeat under the breath, to carry as a mantra through the darkest days and into the new year.

My staff pick for December is a teen selection: Call Down the Hawk (Dreamer #1) by Maggie Stiefvater.

“The dreamers walk among us . . . and so do the dreamed. Those who dream cannot stop dreaming – they can only try to control it. Those who are dreamed cannot have their own lives – they will sleep forever if their dreamers die.

And then there are those who are drawn to the dreamers. To use them. To trap them. To kill them before their dreams destroy us all.”

This is a new series by Stiefvater with some of the same characters from the beloved Raven Cycle series, most particularly, my favorite, Ronan Lynch, a prickly, deeply emotional “dreamer.” The stakes are high: the safety of the world is at stake and Ronan may or may not be the one to save it from destruction.

It is just as lavishly written as Stiefvater’s other books, and a true page turner! 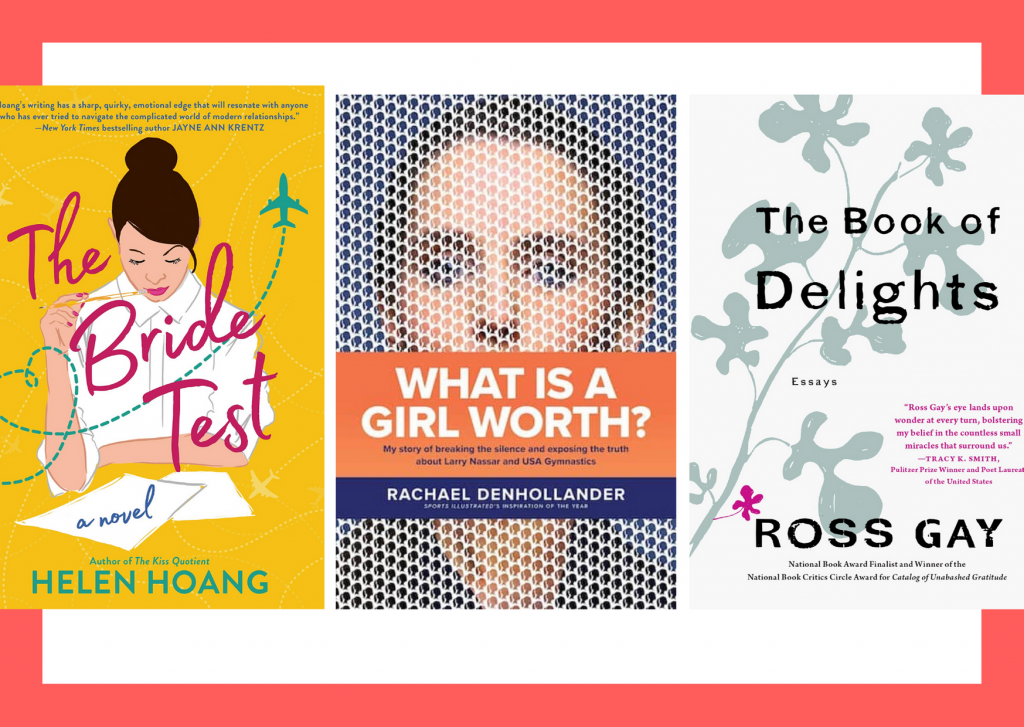 My top five reads from 2019, in no particular order: The Best Lies by Sarah Lyu, What Is A Girl Worth? by Rachael Denhollander, The Bride Test by Helen Hoang, The Book of Delights by Ross Gay, and A Prince on Paper by Alyssa Cole. 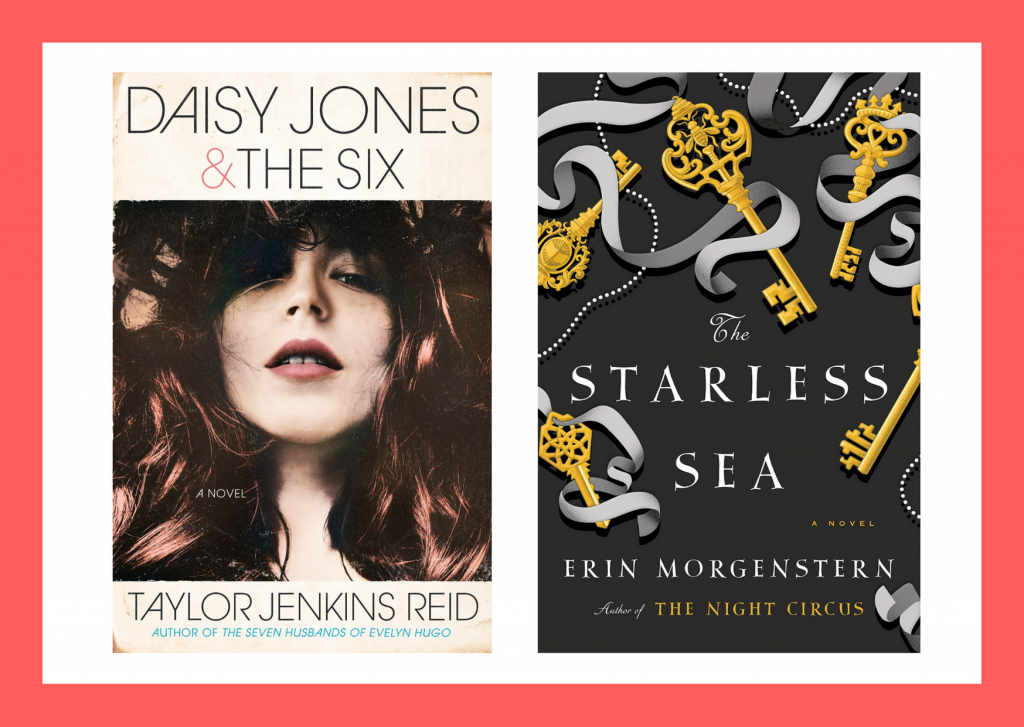 Lately the three-week check out period hasn’t been long enough to finish all the new books I want to read. I couldn’t finish Tegan and Sara’s memoir before I needed to return it for the next people waiting in line and then more desired reads started filtering in to the hold shelf.

I did surprise myself, however, by finishing Daisy Jones and the Six by Taylor Jenkins Reid in only a couple of sittings. I have seen this cover pop up a lot in the media and I wanted to see if it would live up to the reviews. It’s a fun romp through the 1970s rock n ’roll scene which feels similar to watching a documentary about Fleetwood Mac’s Rumors or The Beatles Anthology. The alternating dialogue told in the voices of different characters keeps the story moving, even as I felt like I’d heard the story before. I read some reviews that said the audio book version is even better with a terrific cast of voice-actors, which makes me think I might recommend listening to Reid’s novel.

Spoilers: I was disappointed by the inclusion of the lyrics at the end. I think I anticipated something a bit more complex. I feel the story would have benefited from letting the reader wax nostalgic and imagine the impact of their favorite 70s lyrics.

My #1 goal for the upcoming year will be to finish more of the books I check out! Wish me luck.

I am currently deep into Erin Morgenstern’s rich and delightfully literary fantasy, The Starless Sea. Zachary Ezra Rawlins, graduate student and son of a fortune teller, discovers a mysterious book in the library of his graduate school. The book contains fantastical tales of pirates, a secret underground harbor full of books, and somehow, a story from his own childhood when he found a door into that magical world, and walked away. Alarmed and intrigued to find his life in a book far older than him, Zachary follows clues to New York City and stumbles upon a quest. Listening to the audiobook helps me navigate the many stories that Morgenstern weaves together — each section has a different narrator, and they’ve skillfully drawn me into a tale full of magic, danger, queer romance, and the world’s biggest secret underground library. It’s the perfect wintery audiobook to fall into. 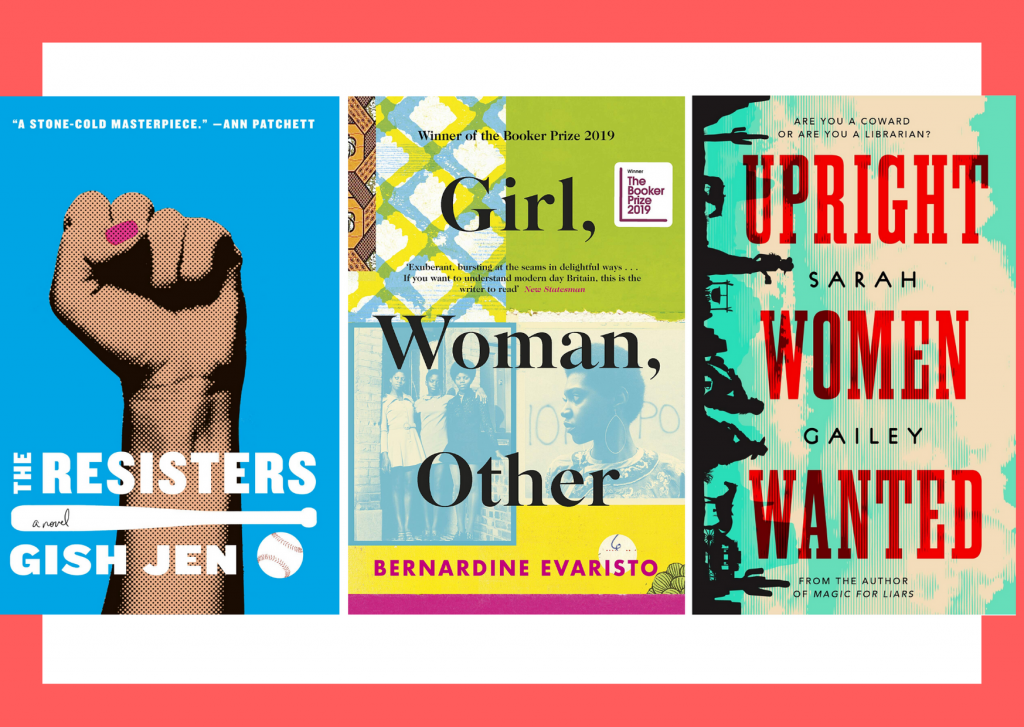 I loved too many books in 2019 to champion all of them here (without even mentioning nonfiction!), but reading sustained me through the year, a deep stew-pot of steadying bookish nourishment I am thankful for again and again, each time a story or character warms me or a memoir or essay has me mulling.  Cantoras and In West Mills were two immersive, character-driven favorites from historical fiction; I whiled away a week last spring with the dreamy, heart-wrenching, lyrical The Dragonfly Sea, and read more fiction from up north, like the short-but-high-impact novels Small Beauty and Jonny Appleseed. The graphic novel Mooncakes was super sweet and fun, and the sci-fantasy romp Gideon the Ninth was super skeletal and fun too. Pet was seriously wonderful.  Sorcery of Thorns had both library magic and a loveable demon.  Waves, read just today, is beautiful and sad.

“For these were not ordinary books the libraries kept. They were knowledge, given life. Wisdom, given voice. They sang when starlight streamed through the library’s windows. They felt pain and suffered heartbreak. Sometimes they were sinister, grotesque- but so was the world outside. And that made the world no less worth fighting for, because wherever there was darkness, there was also so much light.” -from Sorcery of Thorns

2020: Can anyone be faulted for being ready for a new year, as if it might be wholly new? At least there are new books.

Here’s a few recent (or on order) fiction titles that I’m looking forward to: The Resisters by Gish Jen, a tale of baseball, family, and how a dystopia quietly sets up shop. The End of the Ocean by Maja Lunde: “Seventy-year-old Signe sets sail alone on a hazardous voyage across the ocean in a sailboat…” Sign me up. Girl, Woman, Other: I’m really excited to read this Booker Prize Winner from Bernardine Evaristo. Little Gods by Meng Jin: History, physics, memory, time, mothers and daughters. Sarah Gailey’s Upright Women Wanted: queer librarian spies cause a ruckus of resistance in the future authoritarian Southwest. Notable quote: “You’re running away. You’re running away to join the Librarians.” Yep. 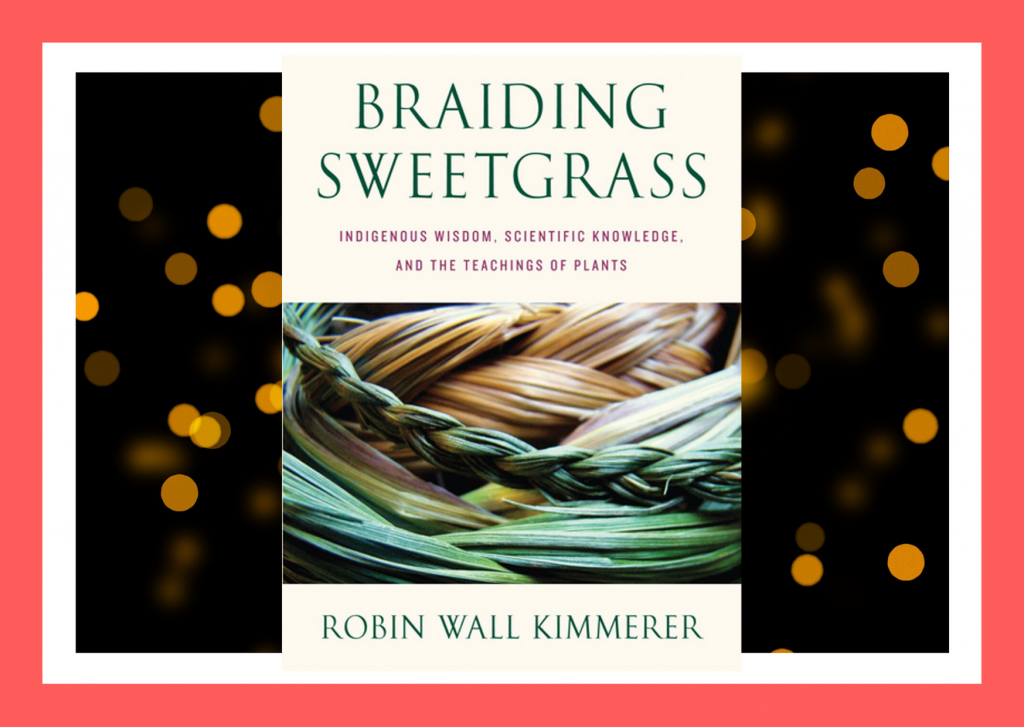 In 2013, Robin Wall Kimmerer’s Braiding Sweetgrass was published.  I am just now settling in to read this collection of nature essays.  I wouldn’t mind having found them sooner, but I am so very glad to read them now.

These days, relentless snow moving and harrowing slow motion drives to work and back home again have eaten into my time for pleasure reading.  All the sweeter, then, are my stitched together moments with Kimmerer’s musings.  “Mother, scientist, decorated professor, and enrolled member of the Citizen Potawatomi Nation”, reads her book jacket bio, and all these identities are plumbed in her writing.

Here is a nubbin of what I gathered from the book’s lovely introduction:  Braiding sweetgrass requires tension, a point of connection & resistance, perhaps the hands of another person, from which the braider works.

I imagine fumbling to get it right, seeking balance between the anchor point and the braider.  Deftness follows as seeking balance yields to sensing balance, balance that is always there but often obscured by effort.  This is how I, on a good day, choose to see all of life and so I may be finding in Kimmerer’s words some things that aren’t meant.  But I like her words. They set me on my own traverse with momentum I would not otherwise have.

She writes of connecting with her ancestral language, nearly extinct with just nine fluent speakers remaining.  With Kimmerer’s help, I am seeing language as a reflection of life view, pointing toward animacy with its verbs full of spirit and being.  Who needs a deadening, delimited noun when “to be a hill, to be a sandy beach, to be Saturday, all are possible verbs in a world where everything is alive?”  Not things to pinpoint with GPS and timepieces, but ancient, evolving, always fresh energies.  Verbs.  Bend my mind to this new shape and I see the world in a new way, the natural world and the place in it that is taken up with people.

Grammar as mind expansion.  Tell me more, please, I think to myself.  And she does.

Thankfully, there is truth that the heart can speak fluently even when words fail.  Words, in whatever language, are an imperfect effort to give form to truth so that it can be understood, passed to others. Braiding Sweetgrass is helping me feel the truth of people and cultures and trees and algae and gratitude… the whole shebang.

When winter calls me away and puts a shovel in my hands again, I hope I can create a verb that will make it a thing of wonder… to be wind, perhaps, to be snow, to be the moment.

As ever, thanks for reading from all of the PPL staff- and wishes for a peaceful new year. 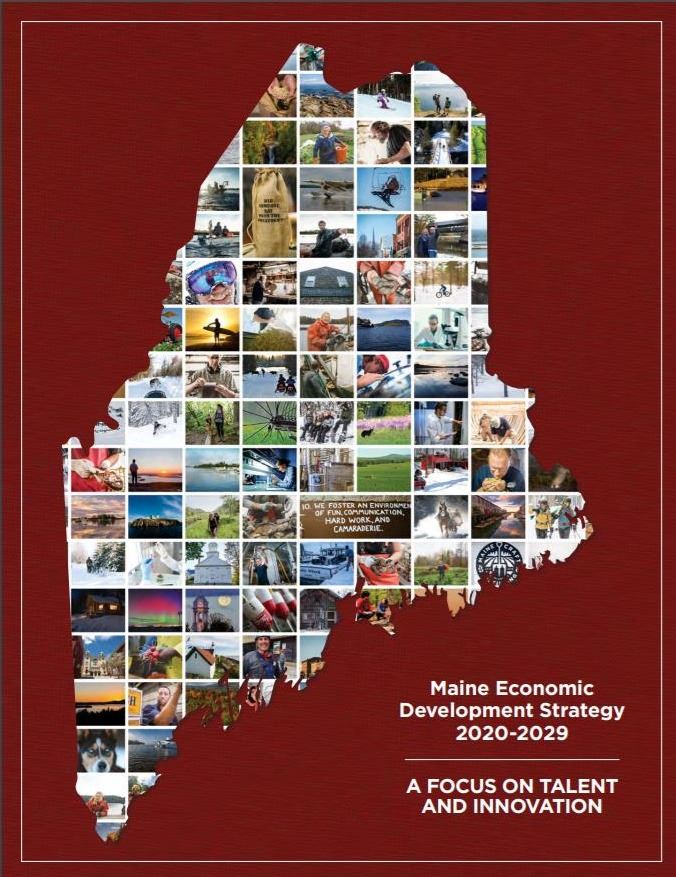 The Maine Economic Development Strategy is a dynamic and nonpartisan roadmap designed to foster collaboration among the public, private, nonprofit and education sectors for
the purpose of creating a diverse and sustainable economy.

For details of the Maine Economic Development Strategy.